HTTP Triggers enable a rule to be triggered by a standard web request sent from a third party application or service, such as IFTTT, Zapier, Microsoft Power Automate (Flow), Tasker, or any other applications/services that can send an HTTP request.

Rule HTTP Triggers are a Premium only feature, and can be accessed during your Premium trial period. If you are using the free tier, please send an email to support@sharptools.io if you'd like us to reset your trial so you can give HTTP Triggers a try.

What can I do with an HTTP Trigger?

Looking for more creativity and inspiration? You can also find more use cases shared by our community users here.

How to use HTTP Trigger

Like other SharpTools rule triggers, an HTTP Trigger can be added to a rule in the Trigger section. Once added, the HTTP Trigger displays a special URL which can be used from other services or applications capable of sending an HTTP request.

Please keep the HTTP Trigger URL private! Do not post the rule's HTTP trigger URL publicly or share with anyone you don't trust as the trigger URL contains a special key that is authorized to execute the associated rule.

Send an HTTP request to trigger the rule

The HTTP Trigger accepts both GET and POST methods. How to initiate an HTTP request varies in each different service/application, but there are several things that are generally needed in order to make the request:

Here is an example of sending a web request in IFTTT by selecting Webhooks as the action in IFTTT's applet. 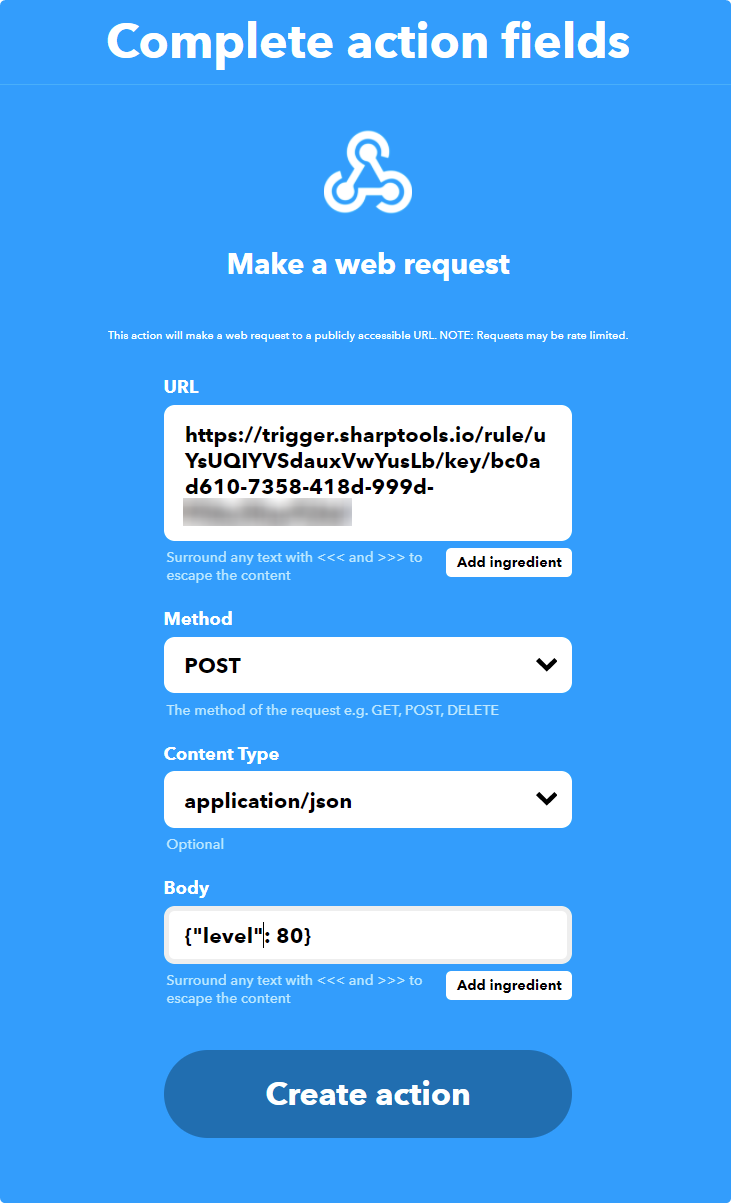 How to pass data to a rule? (Request Parameters)

Data can be included in the HTTP request as query parameters or as a JSON payload to be passed to the SharpTools rule. These parameters can then be accessed in the rule flow in device commands, notifications, and variables by using Context Variables.

You can mix Query Parameters along with a JSON Payload, but if there are any overlapping keys the data in the JSON payload takes precedence.

When editing the HTTP trigger in the rule editor, you can define parameters that you expect to receive as part of the HTTP request. Once these are defined, they can be selected from the Select Variable prompt in various rule actions. See the example below in which a 'level'parameter is defined as part of the HTTP Trigger and can be selected under the HTTP Event section in the Context Variables list in the notification content.

Did this answer your question? Thanks for the feedback There was a problem submitting your feedback. Please try again later.
Last updated on November 9, 2021